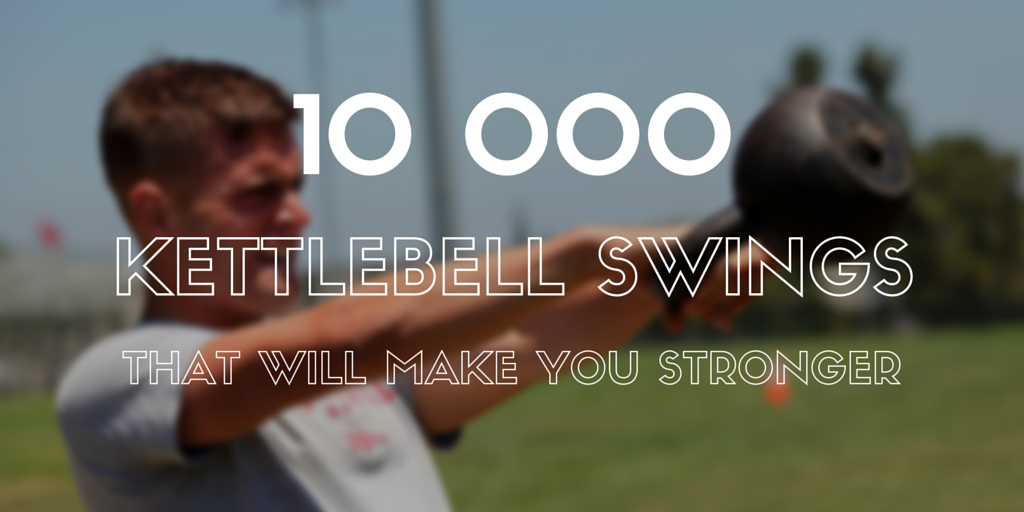 10,000 kettlebell swings that will make you stronger

I swung a kettlebell ten thousand times during the course of a few weeks. It's awful, I wanted to quit, and here's why I'd do it again.

After having done more than three months of strength training with the Starting Strength program, I was ready to mix things up a bit. Because I had planned to run Tough Viking a month later I also wanted to improve my conditioning, while keeping the strength I'd worked so hard for.

There are so many training programs out there but I've always been curious about using kettlebells as my main strength equipment and so when I found The 10,000 Kettlebell Swings Challenge I was hooked.

The 10,000 Kettlebell Swings Challenge is the brainchild of coach Dan John, who wrote about it for T-nation. He later expanded on the article in a forum post and I recommend checking both out.

Dan ran this himself, together with 18 other coaches and athletes and these were their results:

Sounds pretty damn good to me! I'll share my own results further down.

NB! Your form will deteriorate when doing this many repetitions. Bad form increases the risk of injury and so if your's not great yet, I wouldn't do this program just yet. Start practicing the kettlebell swing properly and make sure you can consistently perform it with good form.

It's a very simple program and therein lies its beauty. Just keep swinging until you're done.

Men are recommended to use a 24 kg (54 lbs) kettlebell and women 16 kg (36 lbs). These are only recommendations and you should pick a kettlebell that's heavy enough for you. Dan says:

This is a stand-alone program. If you feel you're able to do a second workout on the same day, then you are 'underbelled' – you're either not going heavy enough or not training with maximal effort.

You'll also pick one strength exercise per day, which you'll do after finishing each group, in reps of 1, 2, and 3. Some example exercises are: press, dip, squat, chin-up.

It sounds more complicated than it is. Here's the template:

That's 100 swings. After the final 50, you rest again, before tackling the next round. Repeat five times and you'll have done 500 swings. Do this two days in a row and then rest one before going again.

Or you can do like me: train Monday and Tuesday, rest Wednesday, train Thursday and Friday, rest Saturday and Sunday. Repeat for five weeks and you'll have done 10,000 swings.

Because the program's so simple and people always think they can make it better, many variations have popped up. Dan John is pretty clear what he thinks of this:

If you change it, fine, but then it’s not the program… I walked into the Sistine Chapel and saw Michelangelo on the scaffolds. I yelled up, "more blue". That’s how I feel when I see people look at a program and immediately "make it better".

With that said, here are some variations you might want to consider.

Others have tried using a "breathing ladder", where you swing the kettlebell once, put it down and take one deep breath, swing it twice, two breaths, etc, etc. Do this up until ten and then back down to one again – that's 100 swings.

The original program didn't prescribe any rest time. I found this weird because rest can affect your finish time a lot and that's the main progression variable throughout this program.

In the beginning, I couldn't do fifty swings in a row, without putting the kettlebell down to rest. So this was my initial focus. Once I could go unbroken through the rounds I started shortening the rest time and in the end, these were my rounds:

It took me longer than planned to complete the 10,000 Kettlebell Swings Challenge. Normally you'll do it in four or five weeks, depending on whether you rest two days in a row or keep a rolling schedule with only ever one rest day. It took me seven weeks.

As you can see above I started out doing two days of only 200 swings. Coming from no conditioning at all for half a year, it felt like a wise choice. In hindsight, I should have just kept grinding and not caring if the initial workouts took long.

Later I skipped two Thursdays and didn't do the full five hundred on the following Friday. I was feeling beat up. Again, I should have kept at it and ground it out.

The middle is me going on vacation, with no access to kettlebells.

While on vacation I put together some charts for my progress – the one above – and was surprised to see how much I sucked. I really didn't feel like I'd skipped out of that many workouts but the numbers told the story clearly.

When I came back home, motivated by this chart, I kept swinging until I hit 10,000.

I really enjoyed this program and saw some great benefits from it too!

I went from doing the five hundred swings in over an hour to 38 minutes in the end, including the three minutes rest between rounds. An improvement of over 30% in just a couple of weeks! 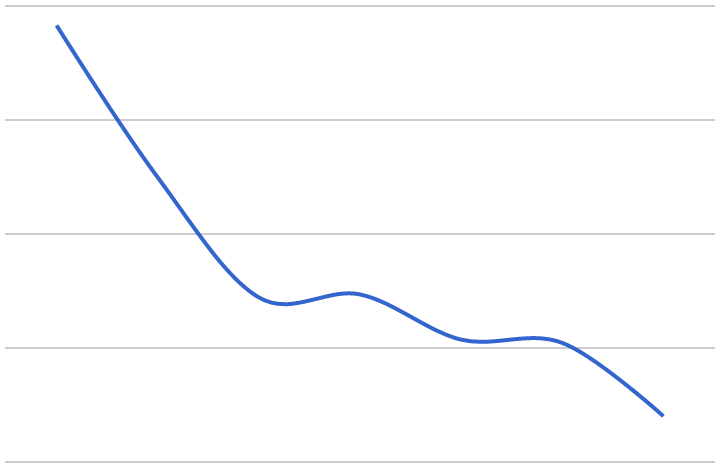 What's interesting though is where the bulk of that improvement happened. I started out with a decent first round, okay second round, and then deteriorating from there to an awful fourth round.

I gassed out early and this program fixed that for me. Broken down into individual rounds: 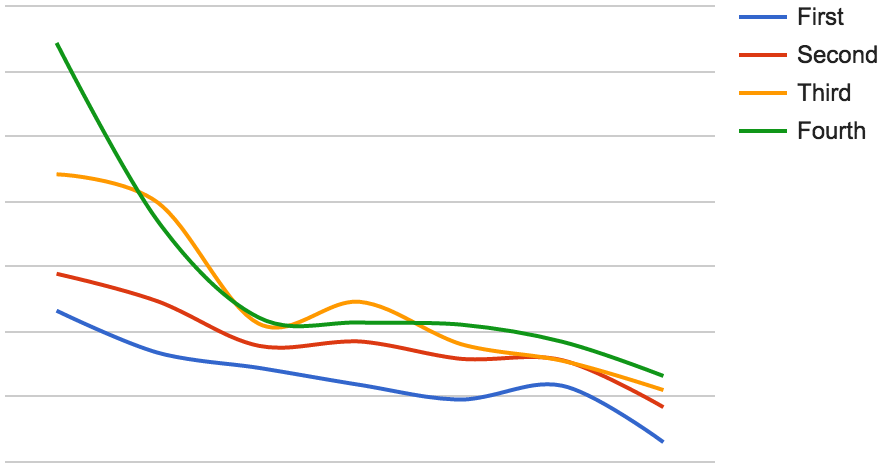 If you're thinking about doing the 10,000 Kettlebell Swings Challenge (and I think you should!) then here's my advice to make it a better experience and get the most out of it.

Most likely your grip will suffer. Remember that when it hurts, you're growing stronger. Push through it and hold on to the kettlebell for as long as you possibly can. You will get stronger.

After the initial shock, you'll find it easier and easier. That's not what you want though – you want to make it as tough and uncomfortable as you can possibly endure.

Try to always beat your previous time, increase the weight of the kettlebell, vary the strength exercises to make them harder. Keep pushing your limits and your body will reward you.

Don't grip with the middle of your hand, but put the kettlebell handle just below where the fingers connect to your hand and then grip it. You want to avoid having the weight fold that skin area as it'll inevitably drop closer to your fingers during the swings.

This will help a lot in avoiding ripped hands.

Don't bother with gloves – you're not playing golf. If your hand rips though, I suggest getting some cheap sports tape and covering it up so you can continue swinging while it heals.

One at a time

Ten thousand swings is a frightening number. Don't think about it – break it down into five hundred per day, hundred per round, and ten per group. Then do one swing, and another, and another. Focus only on what's immediately in front of you and you'll be fine.

If you feel like giving up, at least finish the next group. Then maybe the next and so on.

Ever session is the same, which makes it hard to see any variation and you might mistake that for a lack of progress. I use spreadsheets to visualize getting closer to the end but if you're less of a nerd you could also draw twenty boxes on a paper and cross one out each time you complete a workout.

Hinge at your hips, because it's not a squat. Keep your chest up and back straight. Explode out of the bottom position, so you don't have to pull the kettlebell with your arms.

American swings take the kettlebell to overhead, while Russian swings stop with your arms at about a 60˚ angle. Personally, I prefer a hybrid where I stop at just over eye level.

Get a good bell

Finally, if you're going to do this challenge, I recommend you get a proper kettlebell. It's a shitload of reps, so don't punish your body further with a bad quality bell.

For example, these ones from Rep Fitness!